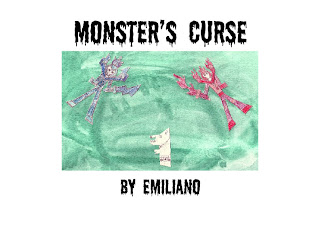 Bang, bang, bang.
“Wake up, Cody,” Dad said.
“You’ll be late for your first day of school,” Mom said.
“Why didn’t you remind me today was my first day of school?” Cody said. “I better hurry up so I can make some friends.”
Don’t forget your pancakes, Cody thought. “Okay, Mom. I’m coming.” Cody washed his hands and dashed to the kitchen and got the pancakes. He put them on a plate and ate them. When he was finished with his pancakes he ran to the bus. Cody’s belt shined red light from its buckle.
At school Cody saw two boys his age. He burst up the stairs and came back to the yard. Cody walked up to the boys nervously. He was thinking they would say no if he asked if they wanted to play. But they said, “Yes.”
Cody introduced himself.
“Hey,” said one of the boys. “My name is Jacob, and this is my brother, Ivan.”
“My name is Cody.” Ivan’s golden hair flew in the air.
Ring, ring, ring.
“What is that noise?” Cody said.
“It’s the school bell.”
“But why is it so loud?”
“It’s a sign to tell kids to get to class.”
“But what class am I in?” Cody turned around and Jacob and Ivan weren’t there. They must have gone to class, Cody thought. I better go to the principal’s office so I can find out what class I’m in.

“You’re with Mr. Jeff,” the principal, Mr. Simon said. “In Room 25.”
In the classroom, Mr. Jeff was talking and talking and talking.
When school was over Cody went home. On his way he saw a spooky house. He went to the school the next day. At recess he told Ivan and Jacob about the spooky house.
After school the boys went to the spooky house.  Its curtains flapped in the wind. The front door swung open and closed by itself. The doorbell rang, but nobody pressed it. The boys knocked on the door. No one answered. Jacob decided to open the door. They went inside.
Ivan said, “It’s scary in here.”
Cody found three flashlights and three swords.
“We should use them later.”
“I found a door,” said Ivan.
Jacob found three medallions, three maps and three rings with great powers. All three of the kids looked at the map. “The map is broken,” they said.
“I think I know a way to fix it,” Cody said.
Cody peeked up the stairs and saw two guards. He said, “Don’t go up here. There are guards.”
Ivan said, “Put on the ring.”
“Okay,” Cody said. Lights flashed as Cody slid the ring onto his finger. The other boys put on the other two rings.
“Now put your right hand up,” Ivan said. “And close your eyes.”

Ice blasted out of Jacob’s ring, and Cody’s ring blasted out lightning. Ivan’s ring blasts fire. Lines formed out of the ice, lightning and fire. They connected in a triangle. The boys’ clothes turn red and blue. In the middle of the triangle there was a magical wand made of steel. Jacob, Cody and Ivan took turns. Cody points the wand at the guards and blasted them with an arrow of fire. Four ghosts came out of the guards’ armor. Ivan, Cody and Jacob followed the four ghosts. The four ghosts managed to escape through the walls. Jacob decided to use the ring. He said, “Cody, freeze the walls.”
“Okay,” Cody said. “Earth,” he said, and pointed the wand at the wall and it shook.
Behind the wall was a dark ruler. The dark ruler pulled his hand up and the kids flew to him in a flash. The dark ruler said to the kids, “Thank you for freeing me from my prison.”
Cody said, “What is your name?”
“You can call me Overlord.” Flames burst from his shoulders. Fireballs ricocheted off his body. The Overlord shocked Cody and took the rings from the boys. The ghosts appeared and turned into a single Cyclops. The one eyed giant grew stiff with muscles. Cody said, “Take out your swords.”
The boys took out their swords. The blade shined in the darkness. The rings flew back to the kids.
The tops of their heads started to shine in circles of light. The kids had magical knight armor. The Cyclops got the medallions. The medallion made the Cyclops into Monsters. They were hard to defeat, but the boys did. They surrounded the Overlord in a triangle. They all charged at him. He turned into Mr. Simon.
“Who did this to you?” Cody said.
Mr. Simon said, “ A witch cursed me a long time ago but she is dead now. Thank you for freeing me again.”
“You’re welcome.”

Hi! My name is Emiliano. I like to draw and I like to eat macaroni and cheese. I’m in third grade. I live with my mom and sister. I am also the author of The Adventures of Mac. I had fun writing this book. If I could have any superpower it would be to shape shift.