MY BROKEN LIFE By Arnold, age 10 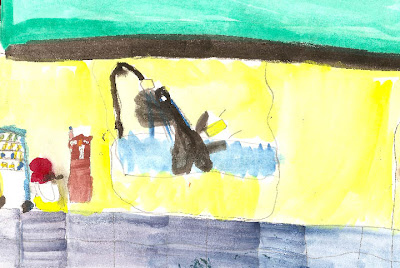 I was in the shower. My skin felt isolated from my body. When I stepped back from the soap holder, the soap bar fell. I slipped and my head hit the corner of the sink. It felt like a piece of glass piercing the skin above my left eyebrow. The blood looked like watery red paint. My head felt cold. My brother walked in and told me, “Hurry, go lay on the bed.”

He brought me some paper towels and told me to put them on my head. My mom came home and told me to get two band-aids. I bled on the bed, my mom had to wash the sheets. My brothers wrapped me with a blanket in a cocoon. I couldn’t use my hands. They were tightly bound in the blanket. I wiggled my head over the edge of the bed. I wiggled too much and my face hit the floor. My brothers helped me up but I tripped over a shoe and banged my toe on the corner of the door. I broke my toenail. My nail bled. My brother brought me a hot rice pack but it unsealed accidentally and rice scattered all over. My brother stepped on it and the rice got mashed into the green carpet. He burned his foot on the rice and hopped around, tripping over a chair and crashing into the door.

Earlier that summer my brother leaped from the table to the bed, his head flew into the wall. When he pulled his head out of the wall pieces of plaster shattered on the floor. Wall crumbs whitened his hair. In the morning my mom found out but she didn’t yell at my brother. She yelled at me.

The next day my brothers yanked the curtain string really hard and the curtains collapsed to the floor. When my mom came home she got so mad. She told them to get my Grandpa because he knows how to fix things like that. When he showed up, he got mad. He thought we were playing but it was an accident.

The last time my brother went to Vietnam our dog jumped on him and bit him on the nose. The dog bit his right nostril, but he bled from his left nostril.

The next day my brother threw a pebble at the eye of a chick and the eye came out, stringy and gooey. When he told me about this I felt weird inside, a tingling feeling in my stomach.

One day last year when the sky shone yellow, my mom came home with food and milk and my brother and I stomped on it and I popped the carton. My mom got mad. “Go clean it up all of you!” she said.

Three days later my dad took me home. I took out a Lipton teabag and I made tea inside a plastic water bottle. I poured hot water inside. My brother and I saw the bottom of the bottle shrinking and I started screaming. My brother yelled, “Stop yelling and get paper towels.” Tea gurgled out the top of the bottle and my brother tried wiping it up with the towels. The tea scalded him and he hollered and my aunt called and said, “Why are you yelling” then she hung up on accident. The burn healed and no one found out until now.

My name is Arnold. I am ten years old. I live in San Francisco with my brother and my mom. I like to swim and draw. I want to be good at math one day. When I grow up I want to be a chemist. I would like to be famous for being a chemist who builds bomb shelters and bombs. I am different from other kids because I have a huge and complicated family that is like a regenerating body. If I were weather I would be rain so I could grow trees so they can give us air. I like the book Valley of Thorns because it has a character that drives off a cliff and dies in a valley of thorns. If I could ask the world something, I would ask: Why do people live if they are going to die? The scariest moment of my life was when I got a hole in my head, the one I wrote about in this book. If I could have a super power I would want to communicate telepathically and to control anything. If I could go back in time I would go the year 2001 to see myself being born. My family is from Cambodia, Vietnam and San Francisco. I would like to go Vietnam. The languages I speak at home are Vietnamese and English. I am also the author of The Bad Example.
Posted by ... at 8:12 PM No comments:

POLK STREET MANIFESTO By the Kids in Room 2

This piece was inspired by (a G-rated version of) Michelle Tea's "Pigeon Manifesto." It was a group effort, written shout-out-style with Robyn transcribing at the laptop. Collage by Alex, Liyi & Wendy. 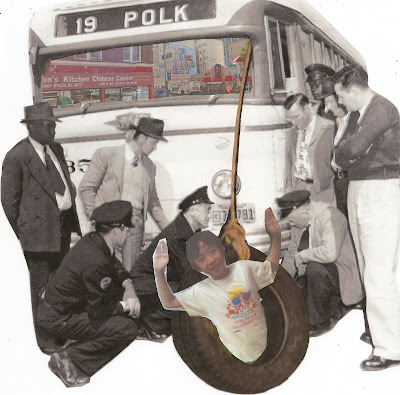 I live on Polk Street. It was once a stream but now it is cement. It’s named after President Polk, who started postage stamps and died of cholera, a thing that sounds like college and collar and cocktail but is actually a disease that can kill you with pooing. If you walk south from our school, you’ll find KFC at the corner of Eddy Street where Serenity’s mom and Judith’s mom both work. People in holey clothes fidget near the soda machines, chattering about money or drugs. Once Jessica’s dad had a coupon for ten free biscuits. When we ate them we felt like kings! Keep walking and a block before you hit Market Street, City Hall will light up the sky and the library will feed you books and the park will squeal when you swing on its tire. If you ask Polk Street, “Why do you let people sleep on your shoulders, and why do you let jackhammers drill through your skin, and why do let buses roll down your spine?” Polk Street will tell you, “It feels like a massage.”
Posted by ... at 2:47 PM No comments: