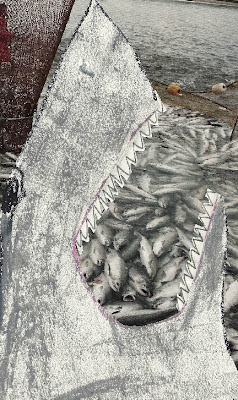 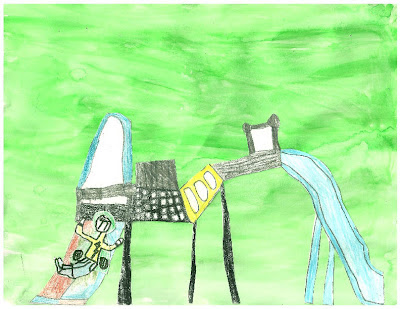 Now I am ten and I want to sleep
but I need to wash the dishes and my family’s clothes.
Just kidding!
In the future I want to drive an ice cream truck.
If people don’t buy my ice creams I will get to eat them all!
If I don’t make any money I will just sleep in my truck.
When I am fifty I’ll be sad because I will be old and not young
and children will be able to jump and play,
but not me.
I will just want to be a cloud
and go wherever the wind takes me.

My name is Tai. I am ten years old. I live in San Francisco with my mom and dad. If I could choose any super power, I would choose the power of invisibility because I want to be able to sleep anytime without anyone seeing me. I want to be good at cutting paper someday. I am also the author of Hill of the Dead, Todd and Ben, and Because They Smell.
Posted by ... at 6:45 PM No comments: 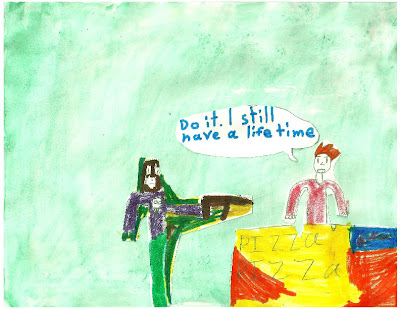 Shirt walks into Green’s Coffee Shop. He points to the menu. It says, One Lifetime $1. “What is that?”

“It is a lifetime,” the worker says.

“I can buy a lifetime?” Shirt says.

Four people come into the coffee shop and buy lifetimes.

“I am going to kill myself,” Shirt says. “So I need a new lifetime too.”

Shirt thinks about what happened at work yesterday. A girl in purple tights was reaching for a Pinky Panda doll. When she pulled it off the shelf, the robots stacked beside it fell to the floor. Shirt summersaulted down the aisle. “What are you doing?” he said.

The girl cried and Rax ran over to the mess. “Can I have a bear?” he said.

“Ok,” Shirt said. “But don’t tell my boss.” He picked up a Pinky Panda doll and handed it to Rax and he walked out the door with the doll.

Shirt’s boss found out and fired him.

“Why don’t you just not kill yourself?” the worker says. “Then you won’t have to buy one.”

“Because I’m about to do something bad.”

Shirt goes to Rax’s house and sets it on fire. Rax escapes. He does not get burned up.

Shirt goes to his friend Marcus’ house. He gives him one hundred dollars and asks him to pay Rax to promise not to bother him. Marcus takes Shirt’s money and says ok.

Rax goes to Target and buys a zombie costume. Rax puts on the costume. He sneaks into Marcus’ house while he is in the shower and steals the money.


Shirt can’t get rid of Rax so he moves away. “Where should I work?” Shirt says to himself.

“Did someone say work?” says a voice behind Shirt.

“Yes,” Shirt says, and turns around. The voice belongs to a fat man with a big mustache.

“My name is Sock,” the man says. “Why don’t you work in my pizza restaurant?”

“That would be great!” Shirt says.

A year later Shirt has a wife and a house and two kids. One day while he is working someone dressed in a zombie costume comes up to him and says, “Hands up or I will kill you.”

“Shoot me,” Shirt says. “I bought an extra lifetime, so it doesn’t matter.”

Sock sees what is happening. He gets out a bat and hits the zombie in the head.

My name is Khenny. I live in San Francisco with my mom and my sister. I am eight years old. I like to play with my friend and my sister. When I grow up I want to be an artist. If I could go back in time I would like to see my mom when she was eight years old because I want to see if she was a good student. My favorite book is The Cat and the Hat because it is fun to play with a cat. I am good at making toys out of bottle tops and erasers and tape because my mom will not buy me toys like this. I am also the author of The Dragon’s Adventure. At home I speak Lao and English. I was born in Laos and I moved to San Francisco when I was little.

My name is Andrew. I live in San Francisco with my brother and my three sisters and my mom, and sometimes I live with my dad. I am nine years old. I have a dog named Pancho, and my favorite book is A Dog on His Own. I’m scared of clowns because of their eyes. They are supposed to make me happy but when they look at me I feel like they are trying to make me die. What I hate most is when people bug me. I am good at making my brother say mercy. I am also the author of The Ice Monster’s Anger, Lion Hunt, John and the Snake and My Dog Poncho
Posted by ... at 11:22 AM No comments: