BILL'S ADVENTURES IN THE ANTI-GOBLIN LEAGUE By Dustin, age 9

Bill dribbled the ball across the court. It was snowing and he slipped on the ground. His opponent had a red nose. He took the ball from Bill and won. What a clown, Bill thought. Bill felt bad that he lost the game and left the court. He decided never to play basketball again. He decided to become a soldier. He became an archer and joined the Anti-Goblin League and his unit was sent out to the front lines on the shores of the Sea of Sadness.

Seals and turtles played on the shore. The archers practiced shooting at them. Bill hit one of them and killed it. They gutted it with a stick. They made a fire on their boat and cooked the seal and ate it. Bill said, "I think this is burned."
“Now Bill you have to go fight the goblins,” said the captain. "Your mission is to save the people held captive by the goblins in the Megan hotel in Hawaii."
“Don’t call me Bill. You call me master now."
“Yes master."
The captain turned to the archers behind him. "Ty, Rush and Fire, you three go too."
“Let’s go archers,” said Bill.
Yes Bill,” Rush said.
"Watch out," Bill said. "The goblins are here now! Behind you! Use your arrows!"


The goblins moved slowly. Their eyes were made of fire and they smelled like chili. The goblins dodged the arrows. They took down Ty. Bill walked over and said hi to the monster and slashed the goblin and it fell on the ground and came back up and slashed Bill's hand off with a dagger. Bill fell down but he did not cry. Bill cut the goblin's heart out of its body. Bill kept on slashing and it died.
Bill and the archers looked at the sea. Some sailboats had washed up on the sand. They picked a big one with a lot of color. They sailed to Hawaii. It was windy and it took an hour. When they got there, they found a spooky hotel on the beach. It was spooky because the goblins were already there! Bill and his men had to rescue the people in the hotel. "Go go, go and go," Bill said.
Bill tiptoed through the front entrance of the hotel. Bill, Ty, Rush and Fire looked behind the desk and in the rooms.
The goblins came out of the doors so Rush shot them.
"You will die," Bill said. Slash. "Now run, run and run."
They ran. The rug was on fire and their feet burned but still they saved the people in the hotel. They carried he people out on their backs. They couldn't run because they had cuts on their feet.
Bill and the archers went back to the boat with the people they saved from the hotel. A turtle and her babies climbed on the boat with their tails. Bill, Rush and Fire got on the boat then they went fishing.
The mother turtle attacked the rescued people with her tail because she thought they were threatening her babies. Bill, Fire and Rush built a fire. Boom!!!! A gun. The goblins were back in a boat next to the archers' boat. The goblins were climbing on board!


"Hey," Fire said to the goblins. "There's a boxing ring at the other end of the deck. Meet us there so the innocent people won't get hurt."
The goblins made grunting sounds and headed for the ring.
"We are the best at this," Bill said. "We will not lose."
The people from the hotel were crowded into the ring because there wasn't any other room for them on the boat. Bill ran to the ring. "Oh no," Bill said. "We forgot the hotel people are here. We need a new place to fight. How about that pool?"
"Ok," Fire said.
The archers and the goblins jumped into the pool. The archers' bows and arrows got wet and they didn't work right. Bill shot arrows at a goblin but it was already dead and sunk to the bottom of the pool so the arrow missed and hit Fire instead. Then Rush called a helicopter to bring help. It comes right away and Rush and fire leave in fly back to base. All the goblins were dead and Bill was alone with them.

At the base, the master yelled at the sky. "Bill, where were you?"
"He's on the boat with the dead goblins," Rush said.

Bill climbed out of the pool. He looked at all of the dead goblins floating in the water. One looked like a clown. It reminded him of the red-nosed guy he played basketball with.

My name is Dustin. I am nine years old. I live in San Francisco with my mom, dad, sister and my brother. I like to do play the Wii. I am good at drinking milk fast. When I grow up I want to be on a SWAT team. If I were a plant I would be a rose and when people picked me up they would get poked. This is my second published book. I am also the author of My Enemy.
Posted by ... at 5:00 PM No comments:

This poem is part of a class poetry project inspired by the song "Old Glory" By the band Harvey Milk. 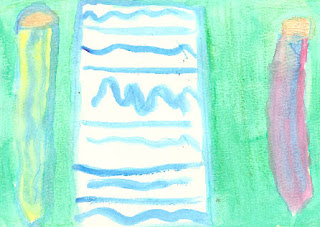 How do you think the pencil feels,
stuck in the sharpener,
squished by your hand?
Have you ever been
squished?
I feel this way
right now,
in
this
class.
Posted by ... at 8:58 PM No comments:

LOST IN THE RICHMOND By Tommy, age 11 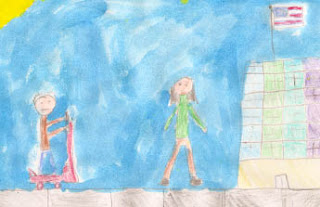 It was scary when I got lost. It felt like I was not going back home, like I was gone forever. I was eight and a teenager friend Stephanie brought me to her house in the Richmond.

I rode my scooter to Chinese Playground. It was four blocks from my house. Along the way I smelled porridge from Dim Sum stores. Pigeons ate bread in a garden. Buses honked on the streets. I knelt down and felt the cracks on the sidewalk with my hand. They felt rough. I had never seen them there before.

Stephanie met me at the playground and said, “I want to show you something at my house.” I didn’t ask what. I went with her and we took the bus to her house. She said that she couldn't bring me back to Chinatown. I think she was lying because she lies to me a lot. The first time she lied to me was when she said I owed her money. The second time was when she said I lost a library DVD. The third time was when she told me her brother was sleeping and if I woke him up, he would beat me up. I always hated that Stephanie kept lying to me, but she kept doing it.


I left Stephanie’s house on my own and rode my scooter all the way across a very busy street. I found out later that she came outside and went looking for me. She didn't find me and she went home. She said her mom would get mad at her for leaving the house.

I saw a women walking down the street. The woman looked a little young and she had blond hair. I asked her, "Do you know how to go to Chinatown?"

"Why are you here in the Richmond?" the woman said.

I told her that my friend Stephanie brought me there.

"I have to go home now," the woman said, "and I can't bring you back to Chinatown."

I thought that she would. "Why not?" I said.

She asked me if I wanted anything to drink.

She brought me downstairs to a store and bought me an orange juice. She brought me back to her work place and asked me, "Do you want to play on my computer?"

I played some games and she said, "You need to call your parents."

I called my mom and she said, "Where are you?"

"I am in the Richmond in this woman's workplace," I said.

My mom told me to give the phone to the woman so she could find out exactly where I was. I hung up and a couple of minutes later some police showed up. I didn’t know anyone called the police.

“Can you bring this kid home?” the woman said.

I followed the police to their car. "Can you drive me back to Chinatown?" I said.

The policemen said nothing and they brought me back to my home.

Hi! My name is Tommy and I live in San Francisco with my mom and dad. I am 11 years old. I don't live with my brother Raymond because he moved to El Cerrito. I like to play computer games like Runescape. I am also the author of The X Army, The Missile and the Citizens, and My Gold Fish Died. I am good at sports such as kickball. I also like playing Blob Tag because it is good for exercising. If I were a creature, I would be an alien because they have good weapons in battles.
Posted by ... at 7:33 PM No comments: