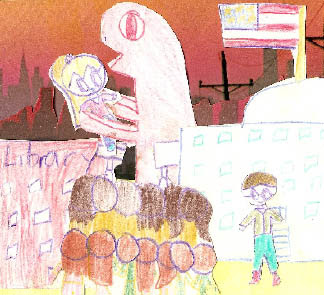 “Oh no!” said Blossom. “The pancakes are burnt!” Flour was everywhere, eggshells cracked, and milk spilled all over the floor. Then she accidentally ran into the stove. Her hand swung into the flame. “Ouch!”

Her mom came into the kitchen. “I’m going to vote,” she said. “This mess better be cleaned up by the time I get back!” Blossom’s mom ran outside to catch the 19-Polk.

Blossom sighed as she walked past the mess in the kitchen. She went into the living room and turned on the TV. A news reporter said, “There is a monster attacking City Hall. It is red and eats people. The monster is now eating—Ahhhh!” Munch, munch. Blossom switched to another channel. She saw the monster stomping around the steps. The monster was as tall as city hall. Scales and spikes covered its skin. It grabbed people with its four long arms, shoved them into its mouth. Another TV reporter talked about how the monster wanted to be mayor because he loved loud noises like the Blue Angles. Blossom’s mom loved loud noises too! Blossom looked at the crowd of people on TV. Blossom’s mom and her friends were there, chanting! Vote for the monster! Loud noises, loud noises, Vote for the monster! Librarians were running out of the library across the street. It looked like they were saying, Shhh! Shhh, but nobody could hear them. Then the monster began to eat everyone up, whether they liked loud noises or not.

Oh my gosh! thought Blossom. My mother is there. I have got to save her. But how will I? Blossom smelled smoke. She turned around and looked into the kitchen. Flames danced from the stove to the curtains to the wall. “There’s a fire,” she yelled. Blossom called 911. There was no answer. She called again. “Still no answer, one last time.” Beep.
“You have called the police.”

“Hi, my name is Blossom and the house is on fire.”

Another fireman went across the street. He hooked up the hose and handed it to Blossom. “You have to finish this yourself,” he said. “We just got a call form City Hall. There’s a big disturbance and we need to get there quick.”

Blossom grabbed the hose and sprayed it into the kitchen. The flames disappeared and she ran inside. The kitchen was burnt and smelled smoky. The floor, counters and even the walls were all wet. “No time to clean this now,” Blossom said, hopping on her scooter. She scooted all the way to City Hall. Her brother Stephan was already there with some rope. He threw an end to Blossom, and she threw it around the creature.

“Got you,” said Stephan, pulling the creature across the steps.

Boom! The monster exploded. Jell-O flew through the monster’s eye sockets and landed in the park across the street. All the people the monster had eaten popped out of holes in his stomach. Blossom saw her mom on the steps covered in slime.

At home, the kitchen was still a disaster. “Sorry mom,” Blossom said. “It’s not cleaned up.”

Hi! My name is Wendy and I am nine years old. I live in San Francisco with my mom, dad, grandma, my brother, Andy and my little baby sister, Judy. I like to draw and I am good at running. When I grow up I want to be an artist. If I were weather, I would be snow because it never snows in San Francisco and I want it to snow here! My biggest wish is for my baby sister to learn a lot when she grows up and have a happy life. I am also the author of Stung.

LOVE THIS STORY? DOWNLOAD THE BOOK HERE, COMPLETE WILL ALL ILLUSTRATIONS! 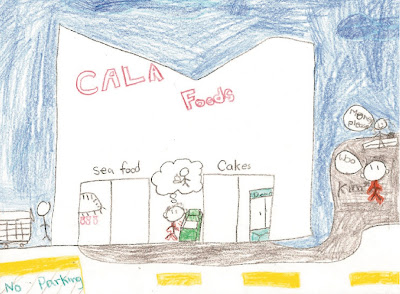 It is winter. Watermelon is out of season in California. Kim decides to go to Hawaii. He travels there by airplane. When he gets there, he goes to a farm to look for work. The man there says, “You can work here on Mondays, Fridays and Saturdays.”

“Each day you come, you get fifty dollars.”

On his first day of work Kim asks the man, “Can I eat watermelons?”

“When you are done Kim,” the man says.

At the end of Kim’s first day the man says, “It is getting dark Kim. You have to go home.”

Kim and the man walk to his house.

The next morning is Tuesday. “I do not have to go to work,” Kim says. Kim folds a toy gun out of paper. “Boom!”

“Sorry,” says Kim. “Can I have the watermelon yet?”

“They are not done growing. They will be done in May. It’s still December now.”

“Why not?” says the man. “Where are your parents?”

“A stranger shot them.”

“My mom and dad were walking with me on a street where a lot of strangers lived. I saw a man with gold earrings and a gun. I was about to tell my mom and dad but it was too late. They fell on the ground. The stranger smelled like rotten cheese and when I smelled him, my asthma was cured, but I got terrible food allergies after that.”

“Then it’s time to go to the doctor,” said the man.

“Too bad. You have to or else you will die. The watermelons won’t be ready to eat until May.”

The man brought Kim to the doctor.

Kim followed the doctor into a little room.

“Where do you want your allergy shot?” the doctor said.

“Okay, pull up your shirt.” The doctor poked the needle into Kim’s stomach.

“Ouch,” Kim said. “That hurts.” Kim felt his body changing. He felt his insides moving. “I don’t have to eat watermelon anymore.”

Hi, my name is Spencer. I am eight. I live in San Francisco with my mom, dad and my baby brother. I am good at jumping high on my bed. I can almost touch the ceiling! Some day I want to be good at taking care of my baby brother. Right now it’s hard because I have so much homework. My earliest memory is of the time I ripped up my mom and dad’s important papers. I was so little, I didn’t know they were important. If I got one wish, I would wish for a baby sister because my baby brother hits me a lot.
Posted by ... at 9:41 AM No comments: