LAST BREATH AND OTHER POEMS By Linda M., age 10 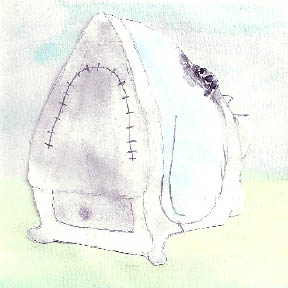 Steam rushed out of the iron.
My great grandma slid its hot metal face
over the sleeves of my grandpa’s shirt.
Part of the shirt was burnt.
She was too busy watching me.
The tea kettle whistled.
She trotted into the kitchen.
I crawled toward the iron
and pulled the wire.
The burning metal
landed on my left hand.
I cried and cried.
My dad brought my teddy bear.
I threw the teddy bear
and it thumped into the wall.

Jingle, jingle
Molly pushed through the door
to Turtle Tower restaurant.
She sniffed the air.
The smell of mi wafted into her head.
Her favorite is Vietnamese meat called Bo
and purple potatoes.
Paper lanterns hung from the ceiling.
Bright lights amazed one the flies.
Uncle Dong snatched the bug in his fist
as it took its last breath.

A Pop of Red

The smell of the doctor’s office
filled my living room.
My grandma clenched onto my hand and
kissed me on the forehead.
I smiled and I felt my cheeks flash pink.
My grandma giggled.
Her lipstick,
a pop of red.
When I traced the wrinkles on her hand
they stretched and softened.

Hi! My name is Linda Munkhbaatar. I am ten years old, and I was born on December 19, 2001 in Ulaanbaatar, Mongolia. I live in San Francisco with my mom, dad, little brother, and my grandma. I like to dance and swim. I am also good at both things and want to be famous for swimming. I want to be good at cooking someday. When I grow up I want to be an artist because I like to be creative. My teacher says I am perspicacious. If I were a plant I would be a rose because my thorns would protect me. My favorite series of books are Amelia’s Guidebooks because they are about helping you with problems. One thing I wonder about a lot is when the universe was created. The scariest moment of my life was when I moved to America because I was afraid no one would like me. I was also excited to see new stuff and to do new stuff. If I got the chance to go backward in time I would go to 2008 to experience the time my brother was born. I speak English and Mongolian. This is my third published book. I am also the author of Can You Dance and Anonymity Attacks.

HOW TO JOIN THE ARMY By Brandon, age 10 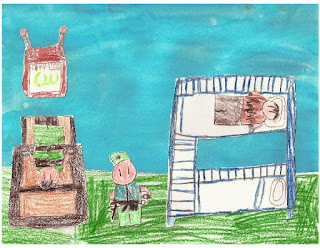 Ben and John walked into the military recruitment center. They sat down in the waiting room. Someone slammed a door. The painting hanging on it shook from a hook. At the edge of the frame, a girl crouched on top on of a hill, holding an M-16. A man opened the door and stomped into the waiting room. His clothes were stiff. The light reflected off his boots and greasy hair. “Next please.”
Ben and John followed the man through the door.
“Hi, I’m Colonel Wong,” the man said. “Have a seat. It says on this paper that you dropped out of high school. Is that right?””
“Yes,” Ben said. “But we have something to show you. We have a video of us catching a bad guy.”
“I think we’re done here,” said Colonel Wong.
“Wait,” John said. “It’s right here on my phone.” He showed Colonel Wong the screen. It showed the Super Bowl on John’s TV. The score was tied, seventeen to seventeen. The camera zoomed in on the quarterback.
“49ers Touchdown!” said the announcer.
“Yes! Touchdown! ”Ben said.
On screen, John stomped over to the window and snatched the remote from the sill.
Bang! Bang!
“That guy in the black coat shot a man on the sidewalk!” John said. “Should we call the cops or shoot him?”
“Oh my god!” Ben said, and snuck over to the window and peeked at the street.
“Let’s call the cops.”
“Hurry up!” They ran down the stairs and out the door.
“The guy saw us,” John said.
“He’s running down Pine.”
“He’s shooting more people.”
Ben glared at a neon sign. “Gun shop.”
“Let’s go inside and grab an Ak-47,” Ben said, running inside. “Give me an AK-47.”
“Aren’t you two too young to have a gun?” said the man.
“Shut up and give me the freaking gun,” John said.
Ben grabbed the gun and John opened the door. Ben fell onto the cement. “This thing is so freaking’ heavy,” Ben said.
“Drag the gun!” John said. “We both saw the man running down that street.”
“Give me that phone,” Colonel Wong said. “This is a great video to show what to not do,” said Colonel Wong.
“So are we in?” said Ben.
“I guess, but you have to fill out more papers.

Hi my name is Brandon. I am ten years old. I live with my dad, mom, sister and brother in San Francisco. I am good at sports. I like to eat and sleep. When I grow up I want to be a firefighter. I am also the author of Because They Smell, Trip to Vietnam and Shadow Cliffs.