THE BETRAYAL By Tai, age 10 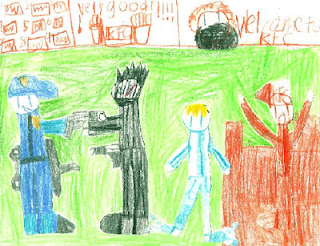 Kenny goes to KFC and smells potato tenders. It reminds him of his dad because his dad got a heart attack from eating too many of them and died. A guy comes with a gun and he says, “Give me all your money or I will kill you.”
A cop sees him and says, “Hands up, robber!”
The robber shoots at the cop but misses then the cop shoots the robber’s mask and his mask falls off: it is Jake. He just got fired from his job and became a robber so he could get money.
The cop shoots at him again and misses. Jake runs away.

The next day the cops go to Jake’s house and knock on the door, but no one answers. The cops break the door down then Jake shoots at the cops. All but one cop dies. One is still alive and he tries to call the other cops. But Jake shoots him in the head.

The next day Jake goes to buy plane tickets with his hood on and puts an AK 47 in his suitcase then he walks down the sidewalk, but he does not see and he bumps into Kenny and his hood falls off. Kenny sees Jake and Jake runs away. Kenny picks up the suitcase and opens it. He sees Jake’s phone and uses it to call the cops and says, “I saw Jake go somewhere.” When Kenny is done talking, Jake comes back to find his suitcase and he says, “Give me back my suitcase or I will kill you.”
Kenny says, “Jake, why are you doing this?”
“Shut up,” says Jake, then he pulls a pistol out of his pocket and says, “Hands up!”
Kenny screams and cries and says, “Don’t kill me. I just want to live a peaceful life with my mom.”
Jake says, “Give me my suitcase back and don’t call the cops”
Kenny tells Jake, “I already called the cops.”
“What!!?” Jake says. “Now I am going kill you.”
“Please don’t kill me. “
“How about when the cops come I will say, ‘it’s just a mistake’?”
“Fine!” says Jake.
“Now you better say that and give me my suitcase back.”
When the cops come Kenny tells them it is a mistake.

The next day Kenny goes to KFC but when he gets to the door Jake pushes Kenny to the back of the restaurant and says, “I am going to kill you once and for all.”
Kenny says, “We made a deal.”
“I don’t care,” Jake says. “I can’t let any people know about our deal. Now I will let you say your last word then you die.”
Kenny says, “Please don’t kill me.” Then he starts crying.
“Bye by,” says Jake. He pulls out a pistol and tries to shoot Kenny, but misses, then he runs back to his house and turns on his TV. He turns it to channel 44 and he sees Jake trying to escape from the cops on the TV.
Kenny’s mom says, “Is that Jake?”
Someone knocks on the door and Kenny opens it. He sees two guys in black suits.
“You are under arrest,” one of the men says.
Kenny says, “Why am I under arrest?”
“I saw you talk to Jake. You made a deal with him.”
The building manager bumps into the two men and says, “Sorry.” He turns to Kenny’s mom.  “You need to pay the rent.”
Kenny’s mom says, “I don’t have that much money. Can I come back in one week?”
“Fine,” says the manager. “Only one week.”
One of the men says, “We need to take your son.”
Kenny’s mom says, “Please don’t take my son.”
“Sorry, but this is my job, so bye.”
Kenny’s mom begs him to let her son come back but they walk away. When they get to the police station, one of the men says to Kenny, “Now we will take you to jail.”
Jake is also locked up in jail. Kenny runs over to him and punches him in the face.

My name is Tai, I am ten years old and I live in San Francisco with my mom and dad. I like to stay home so I can watch anime. I am good at dunking at basketball. I want to be good at kick the ball high some day. I am different than other kids because I watch more anime than them. If I were weather I would be lighting so I could shock lazy people. I would like to be famous for creating a cool video game. One thing I wonder is why are we here on earth. If I could have any super power I would want the power to turn into an animal because I want to see what it is like to be an animal. If I could go forward in time I would go to the year 2090 because I want to see how old I will look. I speak Vietnamese at home. I am also the Author of Todd and Ben, Hill Of The Dead, Ice Cream and Because They Smell.