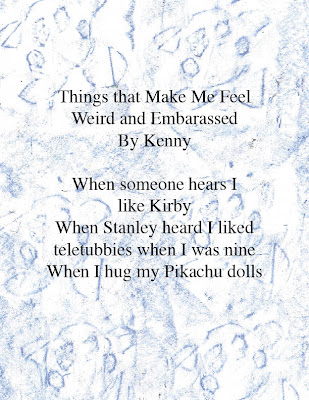 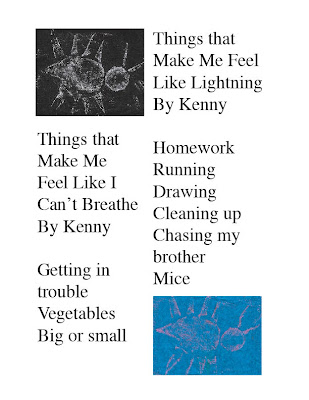 The Green Bone by Stanley, age 10 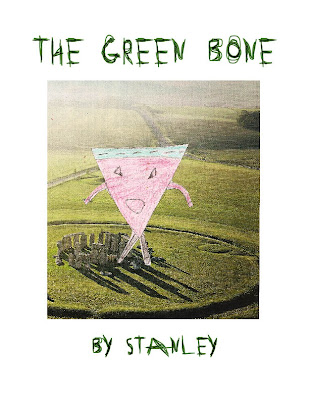 Lamara flew to Greenland. He saw signs that said THAT WAY, THIS WAY, BOTH WAYS, STOP WAY, and one said FREEWAY. He thought he was in a maze. He went north.

A pig jumped out from behind one of the signs and said, “I am the fat pig.”

Lamara hit the pig’s face and it melted. The boy found a green bone and it smelled like dirty underwear. When he got out of the maze, a pair of underwear with hands and legs appeared. The underwear cast a spell on Lamara: “Wam ma poma do-do boeey dmm goo-gooh, kjugiuygiiyrfgjk.”

The spell made him disappear from where he was. He felt shaky and dizzy and he threw up. He hit the ground. Trees oozed red sap. One-eyed maps flew around the trees. The maps smelled like rotten apples and cried, “Appa dah, appa dah, leeeee.”

A boy named Ham walked up to him and said, “Are you my friend?”

“Do you want to be my wife?” Lamara said.

Lamara felt something tap his back. It was his mom.

“Go to the Aswow King,” she said. “Tell him to unlock the fat spell that got me when I was cooking computers.”

Lamara went west. He found the Aswow King and said, “I will kill you if you don’t unlock this spell!”

The King clapped his feet to unlock the spell.

Lamara went home. Ham was inside the house but Lamara didn’t know why.

I am Stanley. I am ten years old. I live in San Francisco and I like to go to the movies. I am good at math and science. Someday I want to be good at winning contests. When I grow up I want to be a doctor. If I were an animal I would be a tiger because they roar. My biggest fear is too many people in my house. I wonder if cats ever kill dogs. I am also the author of Monst Bump, The FF 200, My Grandma, Suxiang Chen and The Number Nine Bus.
Posted by ... at 11:59 AM 1 comment:

Things that Make Me Feel Like Electricity by Edmund, age 9 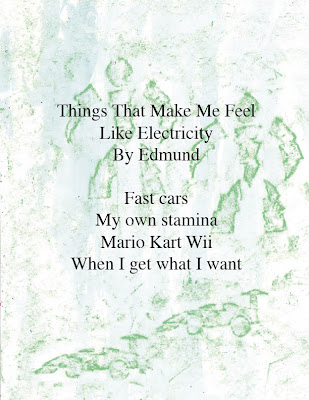 Things that Make My Ears Sting by Catherine, age 9 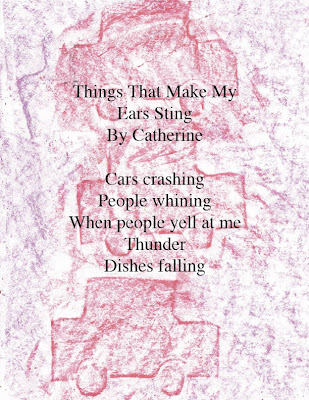 HYPNOTIZED by Kimberly & Anna, both age 10 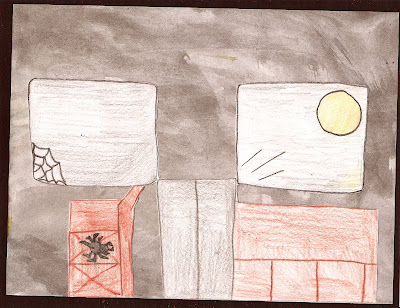 Violence, action and bus transfer that comes to life... are you joining the party?

Cobwebs and spiders hung from the ceiling of the bus, empty as a hollow tree. The Mystery was on his way to Janet’s house to plan a birthday party for Janet’s Mom. Voices whispered and a wolf howled at the moon. The Mystery jumped off the bus and walked to Janet’s house.

As The Mystery and Janet planned the party, Janet’s Mom came back early from a class called How To Get an Attractive Man That Will Fall For You and Marry You.

They hid behind the sofa.

“I thought I saw The Mystery and Janet here,” Janet’s mom said to herself.

Janet’s mom walked to the bedroom and put on fake tanning lotion.

The Mystery’s bus transfer began to wiggle and grow. Arms, legs and a head blossomed from its body. It was three feet tall. It cast a spell.

“Obey my commands and you’ll know what to do,” the transfer said. “No matter what you do, turn your good side into stew. Abracashakachra! My fun shall live in true pain.”

Janet was hypnotized but the Mystery was not. He just pretended to be. He made his eyes turn white. Janet tried to break the spell by hitting herself, but it didn't work. Eventually Janet completely lost control of her body. The Mystery only pretended he did.

“I will grant you any terrifying wish you want,” said the transfer.

“Thank you,” Janet said, looking at the transfer with an evil expression.

“I want a dragon,” said The Mystery. “And I want it as my pet and I want it to be red and it has to obey every command I say.”

“Granted, it’s behind you,” said the transfer.

“You got it,” said the transfer.

“I’m going to be giving you each two weapons,” said the transfer.

“Janet,” the transfer said. “You get a shot gun and two nun-chucks. The Mystery, you will get two machine guns and one hundred hand grenades. Get ready to rock, let’s go!”

It was time to roll.

“I’ll climb on to The Mystery’s shoulder,” said the transfer, climbing on. “Let’s roll.”

The Mystery and Janet climbed on the red dragon and took off. They arrived at the Bank of Junk Food.

“First stop at the bank to steal the junk food and money,” said Janet.

“Put the money and the junk food in the bag,” said The Mystery.

The teller put the cash into the moneybag. Janet, The Mystery and the transfer ran away. They saw Janet’s mom in front of the bank.

“Shut up!” said The Mystery.

“No,” said Janet’s mom. “You don’t talk to me like that. I’m gonna call your principal!”

She opened up her cell phone and dialed. “The Mystery and Janet told me to shut up,” said Janet’s mom.

She listened for a minute and then hung up.

Janet and The Mystery looked down at their hands. Their skin turned green, they began to grow claws on their fingers and toes, and finally scales appeared on their bodies and tales sprouted from their butts. They were dragons. Janet was the dragon of darkness. She breathed out dark breath and The Mystery was the fire dragon. He breathed out fire breath.

“OMG!” said the transfer. “Why does this always happen when I take control of people?”

Their scales melted like water flowing into a river. The spell wore off, they returned to human form.

Janet and The Mystery walked to the park. They met a new girl with humungous muscles bulging out over her white tube top. She picked up a sharp stick and threw it at a blue jay.

“What’s your name?” asked The Mystery.

“I can tell you like violence,” The Mystery said. “Do you wanna help us destroy an annoying bus transfer.”

“Yeah,” Janet said. “It came to life and put us under a nasty spell.”

They walked and found Janet’s mom.

“Who is that girl?” asked Janet’s mom.

“First, Kathy attacks,” said The Mystery. “Then me, Next Janet and Last Janet’s mom.”

At last they found the transfer at the hair salon next door to the Junk Food bank and pulled him out. The transfer sent down four fireballs from the sky to crush them. They dodged them. Kathy slashed the transfer’s arms, so it couldn’t cast strong spells. But instead it cast spells with great effects. They struck The Mystery. The Mystery was in pain. Janet ran to him, pulled a sleeve off of her sweater and covered his wound. The Mystery shot the transfer on the leg with the gun. It survived. It cast more spells but everyone dodged. Janet chopped off the Transfer’s other leg with her dagger. Immediately Janet’s mom whacked the transfer on the head with her nun chucks. Its wound bled badly. The transfer melted like ice cream in the heat. Everything that the transfer granted as a wish disappeared. Janet’s mom fainted because she used too much of her energy.

“Are you alright?” said Janet

“What do you think?” said Janet’s mom, opening her eyes.

The puddle reformed in the shape of the transfer. “The Mystery, I have to find that person.”

Please join us for our next adventure in Betrayal!

Hi! My name is Kimberly. I am ten years old. I live with my mom, dad and sister in San Francisco. My hobby is playing dodge ball. My goal is to publish Episode Two of Stink and Ink with Holly, and beat Sandy’s book publishing record in Robyn's class. When I grow up I want to become an author of Stink and Ink books. My favorite animal is a wolf spider because it’s big and scary. This is my fifth published book. I am also the author of Muni Disaster and Other Stories, Spy Twins, Spy Master’s Death and Quan, Who Buys Us Dim-sum. Be sure to visit our blog, room2ruminations.blogspot.com, and read about our class mural. Holly and I wrote the post.

Hi! My name is Anna. I am ten years old. I live with my mom in San Francisco. My goal is to publish another book this year. My favorite animal is a coyote. When I grow up I want to be a marine biologist. This is my third published book. I am also the author of Wolves and The Magic Silkworm.
Posted by ... at 8:16 PM No comments: